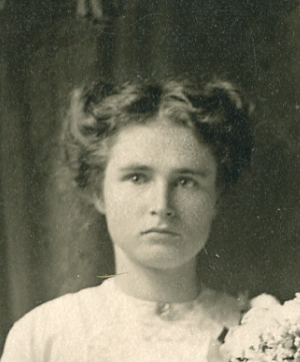 An Authentic Relationship to Rockweed at the Local Community Level

During my boyhood in Minnesota, my Grandma Betsy was a clear soul guiding my life. She had all of her original teeth, she lived to be 104, and she remained clear throughout her life. I once asked her, “What was it like, living on a farm during the Depression?” She replied, “Well, we could grow a cash crop, but there was no money in circulation, so it was difficult to sell a cash crop. If a farmer was mortgaged to the bank, he lost the farm. We weren’t in debt, and we knew how to grow a garden, so we survived. Some farmers who weren’t in debt nevertheless didn’t know how to grow a garden. They had relied on cash crops, buying their food from the stores. They had to learn how to grow a garden and put by food for the winter. That’s what it was all about, living in the country.”

Grandma knew I was headed for college, but she also knew that college didn’t offer much in the way of practical skills, so while I was in grade school, she taught me how to care for a garden. What a great gift that was! When I arrived in Maine in my mid-20’s, I called her up. Grandma asked, “How is your garden?” I replied, “I’ve got stumps. I just cleared forest.” “Oh,” she said, “that’s not good.” “Grandma, I know that when you were a little girl, you went by covered wagon from a homestead in Iowa to a new homestead in Minnesota. That first winter on the open prairie on a new homestead, what did your dad do? He had to build shelter, right? He didn’t have time to bust sod.” “You’re right,” Grandma said, “my dad had to build shelter or we would have frozen to death. I had seven brothers and sisters. My dad didn’t have time to bust sod. He cut prairie grasses and piled them fifteen inches deep on top of potatoes that we just laid on the ground, and the potato vines grew up through the grasses as the grasses settled to about three or four inches thick, just enough to keep the sunlight out. In the fall, we raked the grasses away from the vines, and we had the nicest crop of potatoes. We ate potatoes all through the winter. It wasn’t much fun, looking at the wheat seed and knowing that we couldn’t eat it. We had to wait until Dad could plant it in the spring and grow a crop. That’s why we eat lefse made from potatoes at Christmas to remember and honor the pioneers for what they endured…..so that today you can be the spoiled brat that you ARE!” (Lefse is like a Norwegian burrito wrapper made from 90% mashed potatoes and 10% wheat flour…..just enough gluten to make it hang together so that the pioneer could use it to wrap up whatever else s/he managed to hunt or forage……and oftentimes lefse was simply buttered and sprinkled with a little sugar and cinnamon, making it a meal in itself.)

After that conversation with Grandma Betsy, I went down to the shore. It was May, and the sun was warming the soil around the stumps in my soon-to-be-garden. I decided to plant a potato garden atop the forest floor, covered with rockweed, in honor of Grandma Betsy. It worked! Next year, I yanked out the stumps, and I was able to work the rockweed into the soil and plant coarse seeds like peas and beans. By the third year, I had adjusted the pH with lime, and I had fine enough soil for greens and root crops. I discovered that bedrock was just a foot below the surface. There was no way to go but up. Today I have a fine raised bed garden, the result of hauling rockweed up the hill away from the water for over 40 years. Later I recognized my soul brothers and sisters living on the ledges of the Aran Islands off to the westward of Galway, Ireland. For centuries they have hauled rockweed to create the soil of their islands. Grandma Betsy had taught me how to make contact with nourishing plants and make thrifty use of them, and now I continued in that tradition.

Since that time, I’ve learned how to integrate rockweed into the garden by making compost. A compost pile made with rockweed requires aeration. Otherwise the process will bog down. At the end of June, I have a lot of comfrey plants. They have bloomed and attracted the pollinators, and now it’s time, while summer heat is upon us, to make compost. We cut the comfrey and interlayer it with rockweed. The fibrous stalks help to create channels to introduce air into the compost pile. Later in the season, the stalks of jerusalem artichokes and sunflowers can serve the same purpose. I’ve discovered that when I make compost in this way, I don’t have to turn the pile to aerate it. I can simply come back to the pile a year or two later, and it will have matured and finished into dark black compost.

What is the function of rockweed in the ecology of coastal soils used for growing gardens?

Let’s take a circuitous approach and consider a farming system that has survived for over 40 centuries, a terrace system in China. Somewhere in a terrace system, there is a pond that collects nutrients at bottom. The pond has carp and waterfowl, and sometimes there’s a hog shed with a slatted floor atop pilings driven into the pond. “Nutrient dense muck” doesn’t begin to describe what’s at the bottom of the pond! Every ten years or so, the farmer drains the pond, composts most of the pond plants, and hauls the muck to the top terrace. Over the course of the next decade, the nutrients are washed back downhill by the rainfall. One day it occurred to me that the muck pond I work with is Gouldsboro Bay, and the nutrients I haul uphill are trapped in the rockweed at the edge of the pond.

In Maine where there is a lot of rainfall, there is also a lot of leaching of minerals from the topsoil. The need for replenishment of trace minerals is very high. Therefore public policy should encourage the local use of rockweed on gardens. The shortest hauling path might very well be cooperative harvesting and composting at locations just above the high tide line. Since 60% of the population of Washington County where I live experiences food insecurity and malnutrition, the right thing to do would be for the community to collaborate with upland owners to make rockweed available to all gardeners in the town as compost or dried/milled product.  When that need is met, then harvesters can collaborate with upland owners to market rockweed fertilizer more widely.

(Incidentally, a tabletop hammermill is available from a local machine shop for approximately $3,000 and a seaweed dryer can be built for approximately $2,000.  A co-op of harvesters could share community tools and barter with gardeners for vegetables or market on the internet for cash.)

I’m in the position to haul nutrients to my compost pile, ship dried rockweed to fertilize your garden, or I can supply you with dried seaweeds for your kitchen.  The choice is yours: you can place dried rockweed in the furrow when you sow seeds, or you can place it underneath transplants.  It will stimulate healthy root systems; it will accelerate a compost pile. You can also take the most direct path and use various Soup Mix blends of kelp, alaria, digitata, and dulse in the kitchen to provide iodine, trace minerals and fucoidan (an anticancer compound found in kelp, alaria, digitata) directly to your body.

Seaweed harvesting, done right, is a community activity, and the overall guiding motto is that “it all turns on affection”.  If this is missing, it’s time to have a talk about the Four Promises of Love:

1. I will be a dependable person for you.

2. I will support your individual growth and differentiation apart from me.

3. We will remain immersed in the realm of affectionate talk and sensuous touch.

4. We will transcend gender differences and focus our relationship in the realm of the heart.