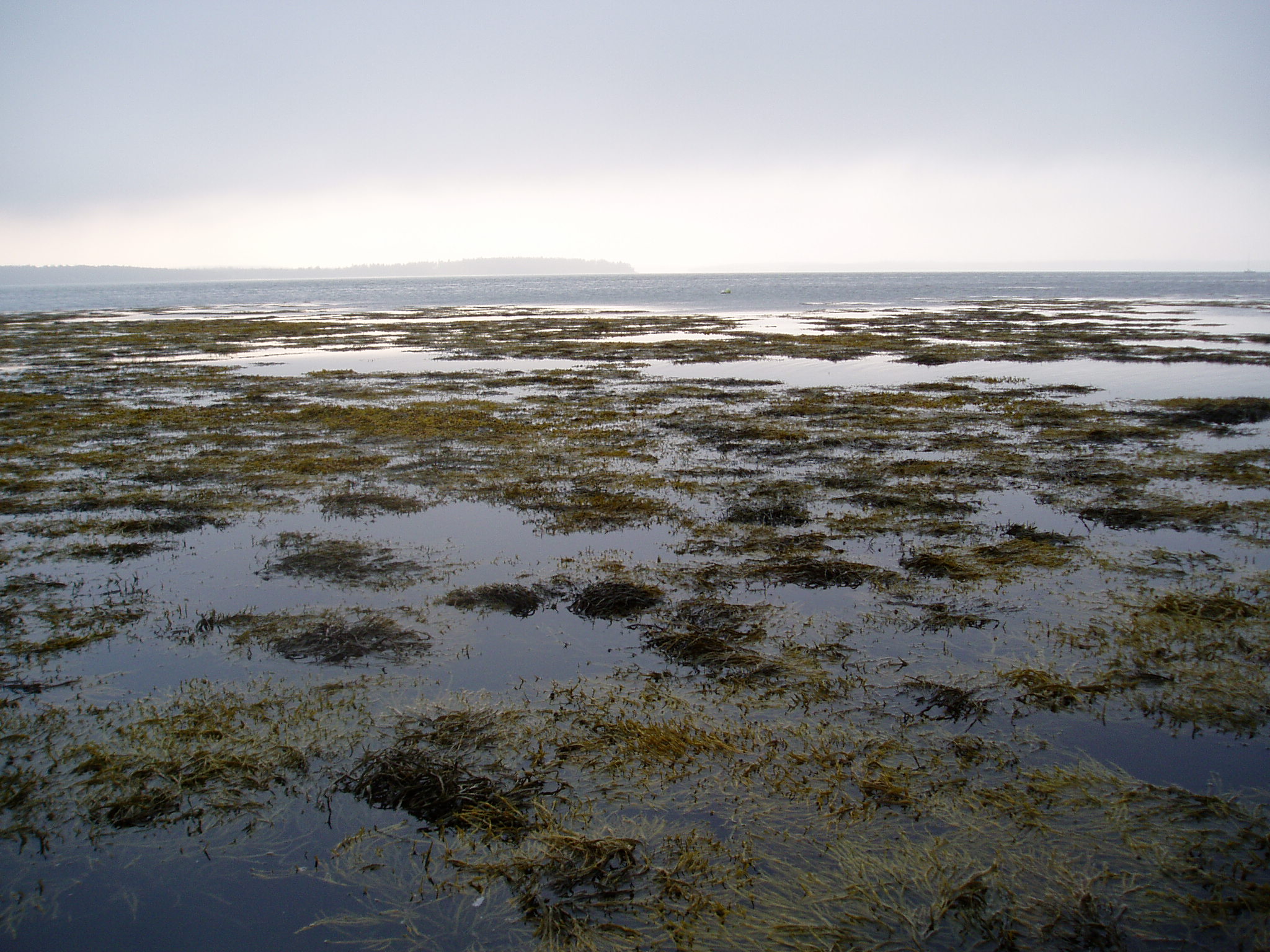 Rockweed is an overarching protective canopy habitat for 150+ other species that rely on it for food and shelter.  90% of the plants in the intertidal zone are rockweed.  Here’s what you need to understand about the morphological changes in rockweed:

The distance between vesicle swellings on the stems of rockweed is the distance that it grew in a year.  In most places, that distance is 3-4″ per year.  In other words, rockweed grows very slowly.  The only time it grows more rapidly is if a plant is cut down to bottom, leaving the holdfast.  The plant has a response to trauma, and if may grow a number of shoots, 7-8″ long, in the first year.  After that, it settles back to its normal growth rate of 3-4″ per year.

It takes a decade for the plant to reach three feet tall, and when the plant is in this form, half of its biomass is below midline, half of its biomass is above midline.  In other words, it’s “bushy” in appearance.  In the second decade of its growth, rockweed grows six feet tall, and its appearance is similar to a mature maple tree, that is, half of its biomass is in the upper  third of the plant, up there in the sunshine, and the lower two thirds of the plant is not bushy but rather appears to taper downward to become just a few anchoring stems at the holdfast.  At this stage of its growth, rockweed is like a climax forest habitat with an overarching protective canopy.

When humans utilize rockweed, its main use is fertilizer.  No traditional seafaring culture has ever developed a recipe for human consumption because it contains bitter alkaloids that signal anyone with primitive common sense to avoid it.  However, there are unethical seaweed companies that continue to throw rockweed into the food mill, making “hot dogs of the sea” that are sometimes labeled as “kelp blend” or not labelled at all.  They do this because rockweed is plentiful and cheap, and by calling rockweed “kelp” they can get a larger market share on the internet.  The best way to avoid this food adulteration is to buy products that are whole leaf or at least large enough pieces so that you can verify the identity of the plant.  In my business, I make Soup Mix blends using a hammer mill screen with ¾” holes and nothing finer.  That way, customers who have already purchased 6″ lengths of whole fronds from me in the past can identify the fragments and judge the quality.

Rockweed grows in the intertidal zone between the high tide line and the low tide line.  The Law Court is the highest court in Maine, and this court has awarded ownership of rockweed to the upland owner.  This is a good decision because now the person who lives with the plants can be educated to carefully observe and protect the plants as overarching canopy habitat and also harvest them sustainably for fertilizer.

My method for judging the presence of healthy overarching canopy habitat in a rockweed bed is to paddle through the bed when there’s three feet of water covering the bed.  If I see a lot of plants splayed out on the surface, that’s an indication of healthy climax habitat.  Working with the same shoreline for 40 years, I’ve discovered that I can harvest one wet ton of rockweed (50 bushels) per 150 feet of shoreline per year and still retain healthy overarching rockweed canopy habitat.  Since my town of Steuben has 20 miles of shoreline, that means the town has a resource of 700+ wet tons.  In my business, I’m able to harvest, hang, dry, and mill a wet ton of seaweed in ten hours, and the end result is that I will realize a gross income of $1,000+, selling it in ten pound boxes to gardeners on the internet.  In other words, the upland owners of my town now hold title to a sustainable resource that’s worth $700,000 if they can educate a generation of gardeners and entrepreneurs who understand that people don’t just buy a product…..they buy a story. For the residents of Steuben which is in Washington County, what is that story?  Well, for starters, 60% of the people in Washington County are described as “experiencing food insecurity”.  Translation: from time to time, they’re not sure where their next meal is coming from.