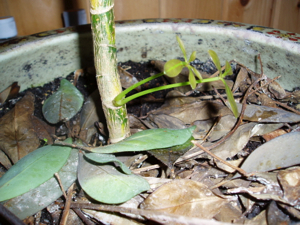 Years ago I read a story in The Secret Life of Plants about a scientist who was designing ways to measure the minutest amounts of energy emitted by the human body.  He admitted to a healer that human will is an energy, but he didn’t know how to measure it.  “I’ll show you,” she said, and she plucked two leaves from a house plant.  She placed one beside her bed, and the other in a back room of her house.  “Come back in a week.”  The scientist returned a week later, and he noticed that the leaf beside her bed was green and vibrant.  The leaf in the the back room was withered and lifeless.  When the scientist asked what made the difference, she explained that it was the energy of her thoughts, her will.  To the leaf beside her bed, she said, “I love you.  Live!”  The other leaf had been exposed to the deepest form of hatred: cold indifference.  Think about it.

I am very careful about who I allow to work with the plants during seaweed harvest and drying, and also in the garden.  It makes a visible difference.

Plants are embedded in the web of life, and when we talk to them, they respond. I had a house plant that developed as one long and spindly stem supported by slings halfway across my bathroom.  It dripped sap all over the windowsill, and finally I said to it, “Sweetie, what am I going to do if you break?”  The next day it responded by budding a new stem at its base.  Later on, I said to the plant, “Sweetie, I need someone to love. Spread the word.  Tell the Universe.”  That was when Nina came into my life, and we discovered that we have a sacred contract. Nina is a photographer and a gardener, and she came into my life when the gardens needed help, and I needed help communicating with the world.  She has stabilized my life in so many ways.  She stabilized Sweetie, too.  “That plant has scale.  That’s why it’s dripping sap.  Let’s put it outside and give it time to clean itself up.”  I buried the long stem in a trench, and Sweetie grew new roots from the stem.  Finally we cut the stem into five sections and rerooted them in a bucket of sand for awhile.  Now Sweetie looks like a healthy balanced house plant with five stems happily living together in the original pot.